One of the perks of both my degree (Geology) and my current job is that I have travelled extensively. In all those travels, I had been to 47 of the 48 contiguous US States, with Maine being the missing one. This year, I decided to be selfish and dragged the family to Maine on vacation, so I that could tick off the final one.

Being a member of the Wallace family means vacation is a time for strenuous hikes and beating on rocks to unlock their inner goodies, to add to our ever growing rock and mineral collection. This vacation was no different. Maine is home to some of the best studied and known Pegmatites, and they quickly became our goal. Pegmatites are neat for a several reasons, the main two being that they tend to form giant crystals (a 19 foot long Beryl found in Maine) and weird minerals in general tend to form in them.

I was able to track down some publicly accessible sites, found a lovely home base to rent for the week, and we set off for a week long rockhounding adventure. Ok not all week. We took a couple days off to go swimming, as it got up over 90F (>32C).

Our first stops yielded the usual kind of rocks I was expecting, but another site did not. There we found dendrites everywhere. The rock itself is a massive feldspar (Fig. 1). You can see that most of the dendrites nucleate at the edge of a fracture surface and then do their fractal thing on the surface itself. Wanting to better understand the sample, I started searching for previous EBSD work on geological dendrites. While a lot exists in the metals world, very little exists in the geological world. To me, this means I have work to do. Let’s see what I can do to get some useful data on this sample!

P.S. I have Alaska and Hawaii to go. Who needs an onsite training in those states? 😉

This time of year is, at least in the US, preparation time for the Microscopy and Microanalysis (M&M) meeting. Like most big shows, every attendee has a significant 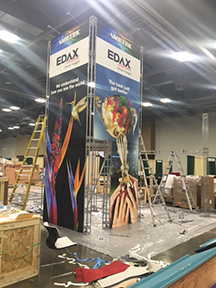 amount of preparation to perform in the weeks (days?) leading up to their travel date. Most readers of this blog will be platform or poster presenters. You may be under stress to collect that last set of experimental data to fill that last hole in the analysis to finalize your presentation.

Life is not so different for the commercial exhibitors like EDAX. Unknown to the general participants, there are many departments under similar pressures to ensure a productive meeting for all attendees. Engineering is applying the finishing touches to new products. Software Engineering is approving the latest versions of software for release. Marketing Communications is contacting current and prospective customers to attend equipment demos and workshops during the exhibition hours. Marketing is receiving the final graphics of product literature for decorating the booth. Service is scheduling engineers to install all the EDAX microanalysis systems in our booth and those of

our electron microscope associates. Applications scientists are finalizing their presentations for the meeting but also for the demos and EDAX workshops to be performed in our booth. Logistics is coordinating the hotels for our employees and shipping our equipment both to and from the venue. About the only employees not under stress before the meeting are Sales who coast now but are under the most stress (or is it strain) during the week of the show.

The exhibitors may seem very relaxed to the visitors during the show, but that image derives from the total effort that they are putting forth now so that you have the best experience possible.

We look forward to seeing all of you in Baltimore, or your next show!

Click here for more information about EDAX at this year’s event.