The city has recently started burying a pipe down the middle of one of the roads into my neighborhood. There were already a couple of troublesome intersections on this road. The construction has led to several accidents in the past couple of weeks at these intersections and I am sure there are more to come.

A question from a reviewer on a paper I am co-authoring got me thinking about the impact of intersections of bands in EBSD patterns on the Hough transform. The intersections are termed ‘zone axes’ or ‘poles’ and a pattern is typically composed of some strong ones where several high intensity bands intersect as well as weak ones where perhaps only two bands intersect.

In the figure, the middle row of images are the raw Hough Transforms and the bottom row of images are the Hough Transforms after applying the butterfly mask. It is interesting to note how much the Hough peaks differ between the three patterns. It is clear that the intersections contribute positively to finding some of the weaker bands. This is a function not only of the band intensity but also the number of zone axes along the length of the band in the pattern.

Eventually the construction on my local road will be done and hopefully we will have fewer accidents. But clearly, intersections are more than just a necessary evil 😊

When you are in Sweden at Scandem 2019 it is the perfect time to order SOS as an appetizer or for dinner. It is made of smör, ost and sill (butter, cheese and herring) served together with potatoes. Sometimes the potatoes need a little bit of improvement in taste. It is very easy to take the salt mostly located on all tables and salt them. Doing that I thought about how easy it is to do this today and what am I really pouring on my potatoes?

Salt was very important in the past. In ancient times salt was so important that the government of Egypt and other countries setup salt taxes. Around 4000 years ago in China and during the Bronze age in Europe, people started to preserve food using brine. The Romains had soldiers guarding and securing the transportation of salt. Salt was as expensive as gold. Sal is the Latin word for salt and the soldiers used to get their salare. Today you still get a salary. Later ‘Streets of Salt’ were settled to guarantee safe transportation all over the country. As a result, cities along these roads got wealthy. Even cities, like Munich, were founded to make money with the salt tax. Salt even destroyed empires and caused big crises. Venice fought with Genoa over spices in the middle ages. In the 19th century soldiers were sent out to conquer a big mountain of salt of an Inconceivable value, lying along the Missouri River. We all know the history of India´s independence. Mohandas Gandhi organized a salt protest to demonstrate against the British salt tax. The importance of the word salt is also implemented in our languages, “Worth the salt”, “Salz in der Suppe” or “Mettre son grain de sel”.

The two principle ways of getting salt are from underground belts and from the sea. It can be extracted from underground either by mining or by using solution mining. Sea salt is produced in small pools which were filled up during high tide and water evaporates under sunny weather conditions. Two kinds of salt mining are done. Directly digging the salt out of the mountain, then dissolving it to clean it. Or hot water is directly used to dissolve the salt and then the brine is pumped up. 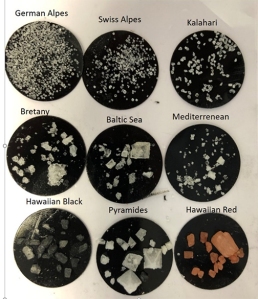 Buying salt today is no longer that expensive, dangerous or difficult. But now a new problem arises. I´m talking about salt for consumption, which usually means NaCl in nice white crystals. So, are there any advantages to using different kind of salts? If we believe advertisements or gourmets, it is important, where the salt we use came from and how it was produced. Today the most time-consuming issue is the selection of the kind of salt you want in the supermarket!

For my analysis I chose three kinds of salts from three different areas. The first question was, are the differences big enough to detect them using EDS or will the differences be related to minor trace elements which can only be seen in WDS. It was a surprise for me that the differences are that huge. I had a look at several crystals from one sample. Shown as examples are the typical analysis of the different compounds and elements for that provenance.

First looking at the mined salt. I selected a kind of salt from the oldest salt company in Germany established over 400 years ago. One kind from Switzerland manufactured in the middle of the Alpes and one from the Kalahari, to be as far away as possible from the others. The salt from Switzerland is the purest salt only containing NaCl with some minor traces. The German salt contains a bigger amount of potassium and the Kalahari salt a bigger amount of sulfur and oxygen (Figure 2.). 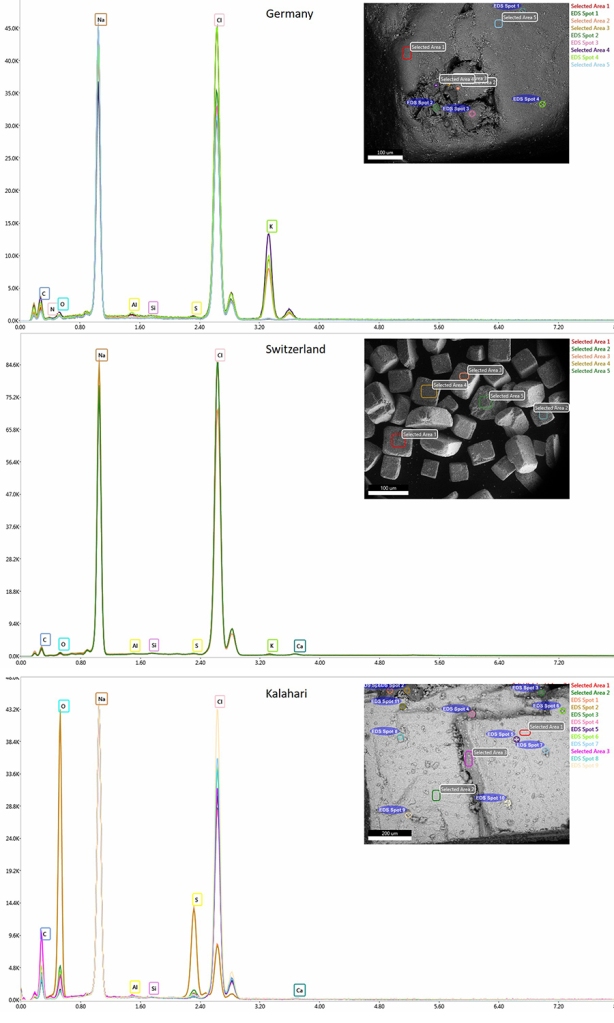 Secondly, I was interested in the salt coming from the sea. I selected two types of salt from French coasts one from the Atlantic Ocean in Brittany and another one from the Mediterranean Sea. The third one came from the German coast at the Baltic Sea. The first interesting impression is that all the sea salt contains many more elements. The Mediterranean salt contains the smallest amount of trace elements. The salt from the Atlantic Ocean and the Baltic sea contains, besides the main NaCl, phases containing Ca, K, S, Mg and O. A difference in the two is the amount of Ca containing compounds (Figure 3.).

Finally, I was interested in some uncommon types of salt. In magazines and television, experts often publish recipes with special types supposedly offering a special taste, or advertising offers remarkable new kinds of healthy salt. So, I was looking for three kinds which seem to be unusable. I found two, a red and a black colored, Hawaiian salt. The spectrum of the red salt shows nicely that Fe containing minerals cause the red color. Even titanium can be found and a bigger amount of Al, Si and O. The black salt contains mainly the same elements. Instead of Fe the high amount of C causes the black color. A designer salt is the Pyramid finger salt, which is placed on top of the meat to make it look nicer. Beside the shape, the only specialty is the higher amount of Ca, S and O (Figure 4).

It was really interesting that salt is not even salt. As the shape of the crystals varies, so they differ in composition. In principle it is NaCl but contain more or less different kinds of compounds or even coal to color it. There are elements found in different amounts related to the type of salt and area it came from. These different salts are located in a few very small areas in and on the crystals.
And finally, I pour salt onto my potatoes and think, ok it is NaCl.