As some of you may know, I dabble in woodworking. Over the years, I’ve built several things for our home. I’m embarrassed to admit that when things don’t go right on these projects, I’ve also been known to use some colorful language to express my frustration. I’m a little prouder that color maps have been the language of EBSD since the inception of the automated systems. Figure 1 shows one of the first color maps I created with the help of Karsten Kunze, who was a Post-Doc at Yale University while I was working on my PhD. The colors are associated with prominent peaks in the ODF. Namely the ideal copper orientation {112}〈111〉 in blue and its statistically symmetric variant (i.e. arising from the processing symmetry – rolled sheet in this case) in red, the ideal brass orientation {011}〈211〉 in green and its statistical variant in orange. The ability to illuminate the crystallographic orientation aspects of the microstructure using such color maps took off quickly. I’ve always thought such maps have an aesthetic beauty to them. As the New Mexico based artist, Georgia O’Keeffe said “I found I could say things with color… that I couldn’t say any other way.” 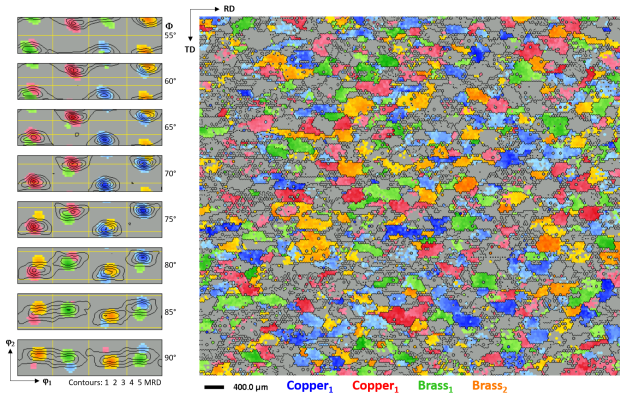 I remember a conversation in the lab with Karsten and my advisor, Professor Brent Adams, arguing whether we could see some patterns in the arrangement of the different “colored” orientations. We found each of us were predisposed to seeing patterns for certain colors over other colors. This led to one more chapter in my PhD thesis focused on orientation correlation. In this chapter, I tried to confirm the presence of patterns in the arrangement of orientations within the microstructure with some statistical rigor. In the end, there didn’t appear to be much correlation for any of the colors.

There has been some recent work on improving color mapping. There are two parts to this, to try and get (1) more “perceptually uniform” color maps1 and (2) better color maps for showing crystallographic orientation particularly for low symmetry materials2,3. I’ve implemented these ideas into OIM Analysis™ v8.5. This version will hopefully be ready early this year – we are currently in the testing/bug fixing phase. The reason for “perceptually uniform” color maps (PUCM) is that we can see variations within some colors but not others. For example, Figure 2 shows a GROD map for a steel sample after 10% tensile strain. The mapping has been done using our standard “rainbow” color gradients and with a PUCM version of the rainbow gradient.

You will notice in the color gradient that it is difficult to see subtle color variations for blue, green and red in the standard rainbow gradient, whereas the PUCM color gradient shows a more consistent variation in the colors across the full range of colors. The variations at the top of the color scales are 10%. From a purely aesthetic point of view, I like the vibrancy of the colors in our standard rainbow color mapping. However, I can also see that the standard color gradient can be somewhat misleading as to the degree of color variation. I noted in my thesis, “This visualization of the microstructure is a useful technique for coupling the morphological and orientation aspects of microstructure into a discrete picture. … Orientation correlation calculations can be made to statistically quantify this apparent structure. This is discussed in the following chapter.” In other words, the colors are nice and helpful. They can serve as a guide for further quantitative analysis, but without that subsequent chapter on the “further quantitative analysis”, our microstructure characterization report will end up as a picture book for the coffee table.

Here is another way to look at the benefits of perceptually uniform color mapping. Figure 3 shows a series of IPF maps where I have rotated the data to show the large grain at the center in several ideal orientations. The top row uses our standard color triangle, whereas the bottom row uses the PUCM color triangle. Note that the subtle color variations in the large grain are more evident in some colors than in other colors.

It is interesting to note that, in general, the PUCM maps show less color variation than our standard IPF maps. Also note that the degree of color variation is more consistent across the full range of colors. Consistency is good, but the results are not as dramatic as I had originally anticipated. PUCM does not alleviate the need to extend our analysis beyond pretty pictures to a thorough quantitative examination of the orientation data.

For the lower symmetries, the PUCM color mapping schemes are quite different from our standard color mapping schemes and include both white and black to extend the available color palette. As can be seen in Figure 4, for rhodochrosite, the extended PUCM color palette works well for standalone IPF maps, but does not work as well when the IPF maps are overlaid on a gray scale map, such as an IQ map. So once again, the PUCM maps have some advantages and disadvantages over the standard maps. Certainly, having more views of the same data is helpful. But another chapter on quantitative analysis is needed. 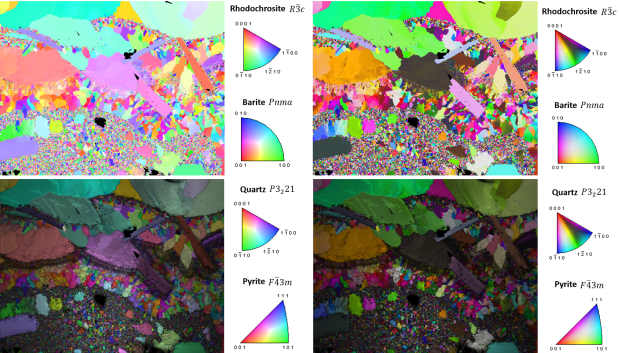 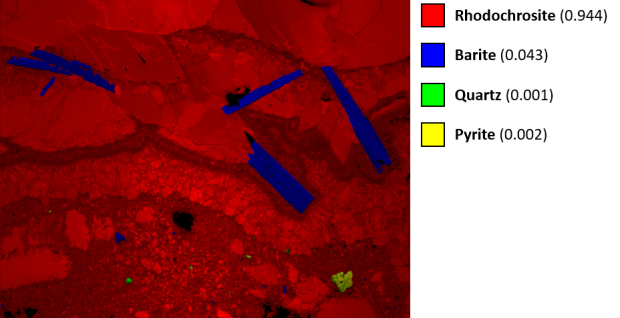 Figure 5. A phase map for the rhodochrosite mineral specimen.

OK, probably a few too many references about the need to go beyond pictures to quantitative analysis, so let me end on a fun anecdote about color from the “Microscale Texture of Materials” Symposium at the joint ASM/TMS Meeting in Cincinnati, OH in October 1991. At this meeting, I gave our first presentation on results obtained using fully automate EBSD. My presentation was short leaving time for an energetic discussion. One point of discussion was the bit depth needed for image processing to detect the bands in the patterns. My advisor, Professor Adams, said something along the lines of “the human eye can only differentiate 32 colors” (he meant 32 gray levels). I remember Professor Dr. Robert Schwarzer chimed in after Brent with “I don’t know about the American eye, but the European eye can certainly see more than 32 colors!” Of course, we all got a big laugh 😊. Perhaps my European friends can get by with the color maps and can skip the extra “chapter” on quantitative analysis!