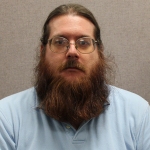 Shawn Wallace joined EDAX in 2015 as an Applications Engineer specializing in EBSD. He has a strong background in all sorts of instrumentations including EBSD, electron microprobe, all sorts of mass spectrometry, and computed tomography. In his career, he has taught researchers of all levels, from post docs to undergrads, how to use instrumentation and he continues that here at EDAX.

Shawn earned his MS in Geology from the University of South Carolina. His research focused on method development for ICP-Mass spectrometry and geothermobarometry to help better understand planetary differentiation. After earning his degree, Shawn worked as a Scientific Assistant at the American Museum of Natural History in New York City, where he helped study the origin of the Solar System using EBSD and other instruments, including 3D work with computed tomography. Shawn hopes to bring those 3D skills to the rapidly expanding 3D EBSD world.

When Shawn is not busy running samples, he can often be found in nature, either hiking or fishing or just staring at rocks.